This post is an explanation of my recent art work that I submitted as my final piece for uni. I’ll start from the beginning. I first discovered the wonderful uses of concrete in my first year at uni. I had just finished sixth form where I never really felt challenged to push the boundaries when it came to my artwork. Arriving at uni, I wanted to explore new material, this is when I happened to come across a ‘concrete art’ video on youtube and it all started from there. Each year, my work has revolved around the material concrete, and this year I wanted to explore what happens when two very different materials come together a little bit more than the previous years. As for the message behind my work, I was always interested in the topics Freedom & Censorship. With these opposing topics at the forefront of my practice, I began to explore how I could portray my thoughts to the viewer. In previous works, I explored both topics. I censored my own work in an act of protest, and I also created large works to evoke the freedom I have. Recently, I decide to make my work more personal as I believed this was something that was lacking in my practice. In May this year, I finished This is not a Joke, and it is definitely not Amusing. 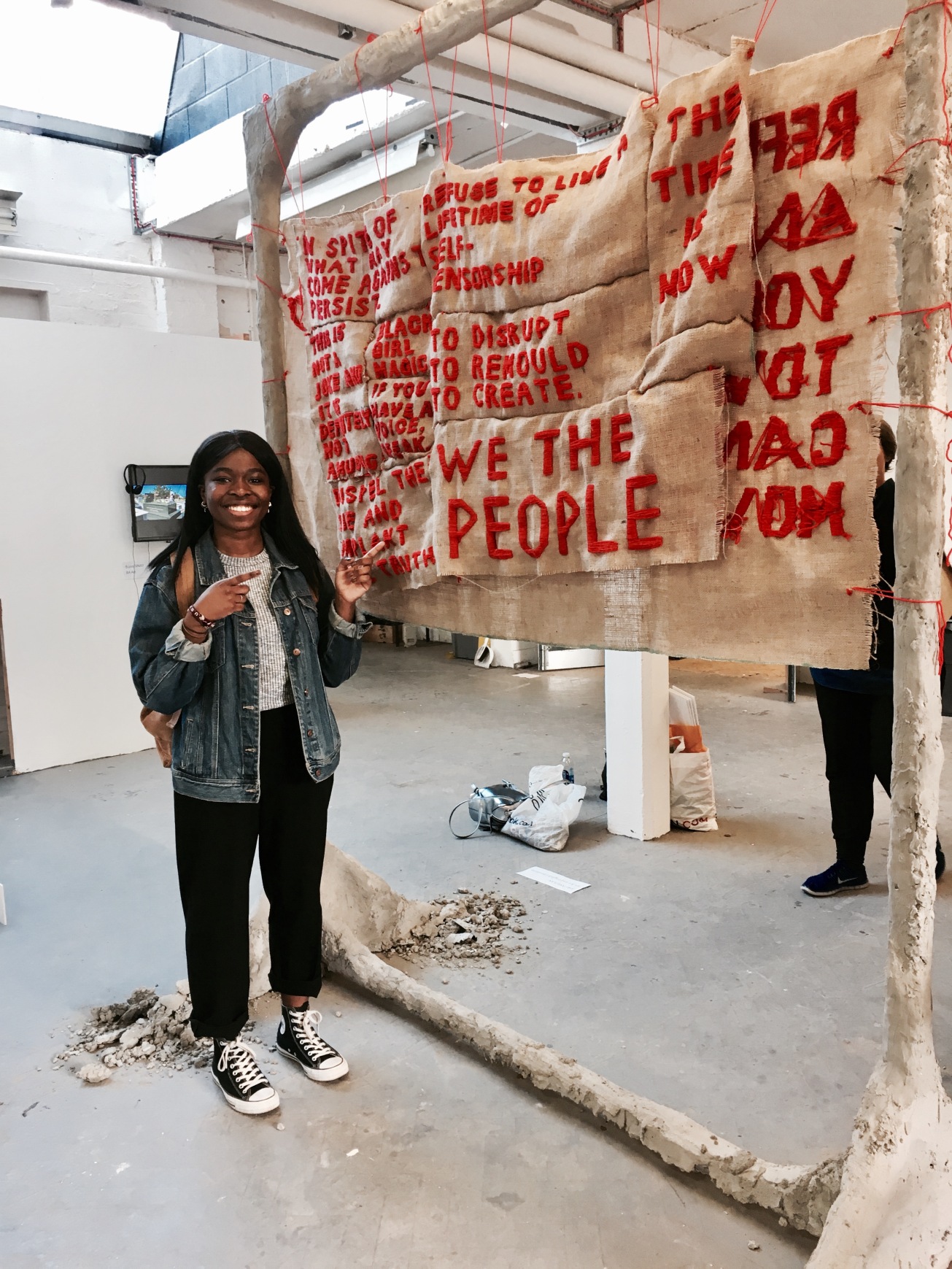 Nowadays, when one thinks of the “Black woman”, words such as racism and oppression come to mind. In one sentence, my work is about empowering the black woman. Along with many other black female artists, authors, and public figures, Reni Eddo-Lodge was at the heart. Her book Why I’m no longer talking to white people about race was based on a blog post where she discussed why she would no longer talk to white people about race. I was intrigued by the concept of not talking to particular people and inserted it into my work. My work only addresses the black woman because I feel that while everyone is talking about the negativity around the black woman and setting the record straight to the oppressors (which is a good thing), we’re not actually talking to the black women who are at the center of it all. My work is full of positive statements to uplift and encourage the black woman to stand up and speak out. The concrete stand in my work represents her, and the bumpy/ rough texture is a physical portrayal of how the black woman has been attacked both physically and verbally. While this has happened, she still stands tall and strong with her roots deep. Nothing will move her. As for the hessian fabric, I found out that slaves were forced to wear hessian garments (a rough and irritable fabric). As I spent hours upon hours sewing into the hessian, I started to feel how irritable the fabric was. This made me feel only 0000000000000.1% of what slaves had to go through. What I found powerful is that I kept on going, and the act of forcing red wool into the rough hessian to me was my way of injecting the positives into the negatives. I put a new lease of life into an otherwise dead and bleak fabric.

One thought on “‘This is not a Joke, and it is definitely not Amusing’”